India’s Rap To Pakistan At UN: Don’t Lecture Us On Minorities

Stumbling Block Or Bargaining Chip? The Fate Of 5,000 Taliban Prisoners In Afghanistan

If there was such a thing as a diplomatic roast, what India served to Pakistan on Wednesday at the United Nations would come quite close to it. Following Pakistan’s unrestrained shots at New Delhi over minorities and the state of Jammu and Kashmir, India used its right to reply at the UN Human Rights Council session in Geneva to serve a sharp rejoinder: not only has Pakistan become the “world’s terrorism factory”, it has also alienated its own people through the “continued mistreatment” of Hindus, Christians, Shias, Ahmadiyas and other minorities.

“In this Council, Pakistan has referred to situation of minorities in India. Minorities in India have been Prime Ministers, Presidents, Vice-Presidents, senior Cabinet Ministers, senior civil servants, cricket team captains, Bollywood superstars. Can the minorities of Pakistan claim even a shadow of this? All they have are blasphemy laws and relentless abuse and violation of their human rights,” Indian Representative Nabanita Chakrabarti said.

Once again Pakistan’s delegation chose to “misuse” the council to make “fallacious references” about internal matters pertaining to Jammu and Kashmir, the diplomat said. “We ask Pakistan to stop inciting and supporting violence and terrorism in any part of India and refrain from meddling in our internal affairs in any manner,” she said. 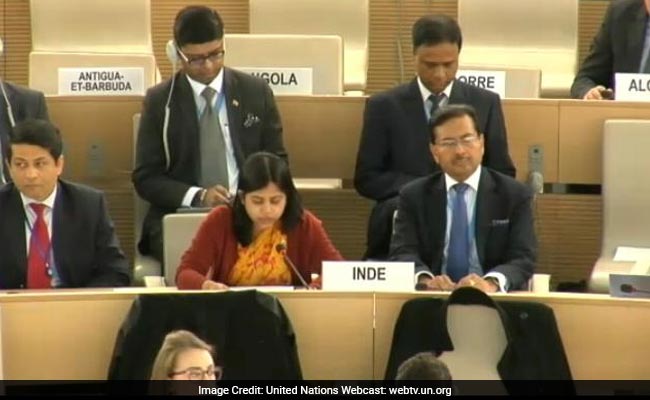 “The Indian state of Jammu and Kashmir is part of a pluralistic and secular democracy, where an independent judiciary, an active media and a vibrant civil society guarantee freedoms. In contrast, Pakistan-occupied Kashmir is administered by a ‘deep state’ and has become a hub for the global export of terror,” the official said.

India said that Pakistan’s continued support for terror groups operating in Jammu and Kashmir was “the main challenge to protecting the human rights of our citizens in the State”. “We also demand that Pakistan must fulfil its obligation to vacate illegal occupation of Pakistan-occupied Kashmir (PoK),” Ms Chakrabarti said.

Earlier at the council, Pakistan had said that “the repression in Jammu and Kashmir is the most reprehensible manifestation of the flogging of human rights and the unleashing of violence by an increasingly communal and extremist state”.

(With inputs from PTI, IANS)

A Note for Baloch Missing Persons

Noroz Hayat Baloch It was a gloomy morning, and it snowed heavy last night, trees …